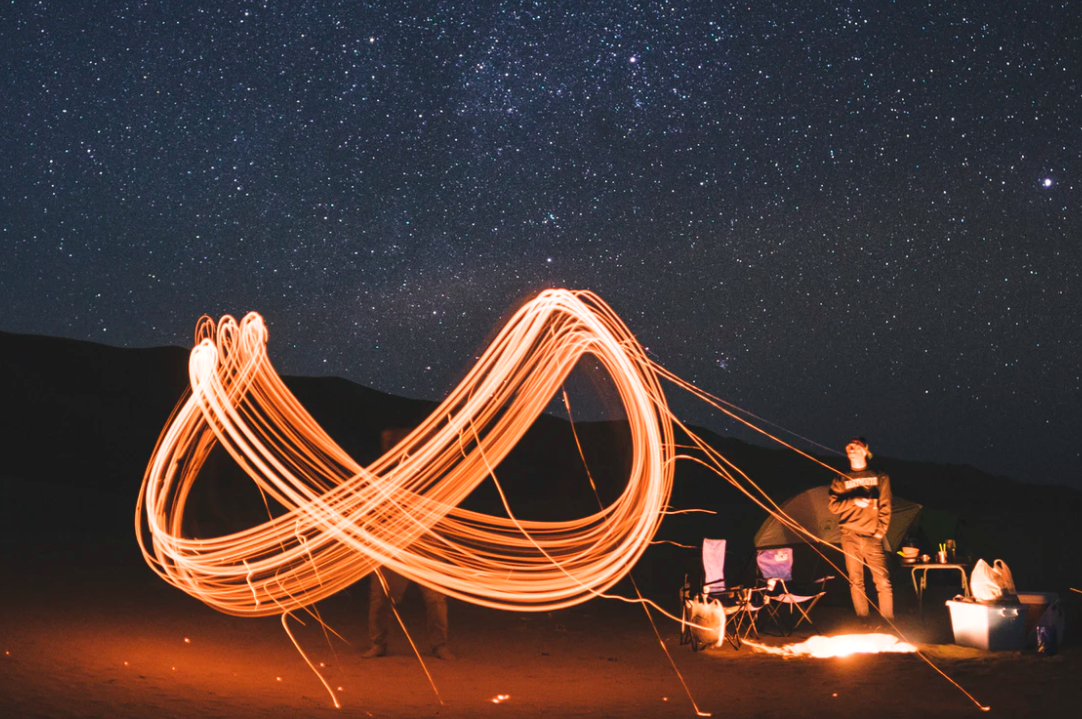 We have been following the white paper by John Hughes1. And so far we've touched upon the below.

We've been talking about how functional programming is different because it lets us break down complexity in different ways. We mentioned that this is possible because of two main types of glues i.e. the way we put things together after breaking them down. We were introduced to the first glue - higher-order functions in the last two posts. It helped us build re-usable functions.

In this one, we will cover lazy evaluation to see how we can put functions together and how it is different from the traditional way to program.

We will write programs that use Numerical Methods to calculate the square root of numbers. There will be code! 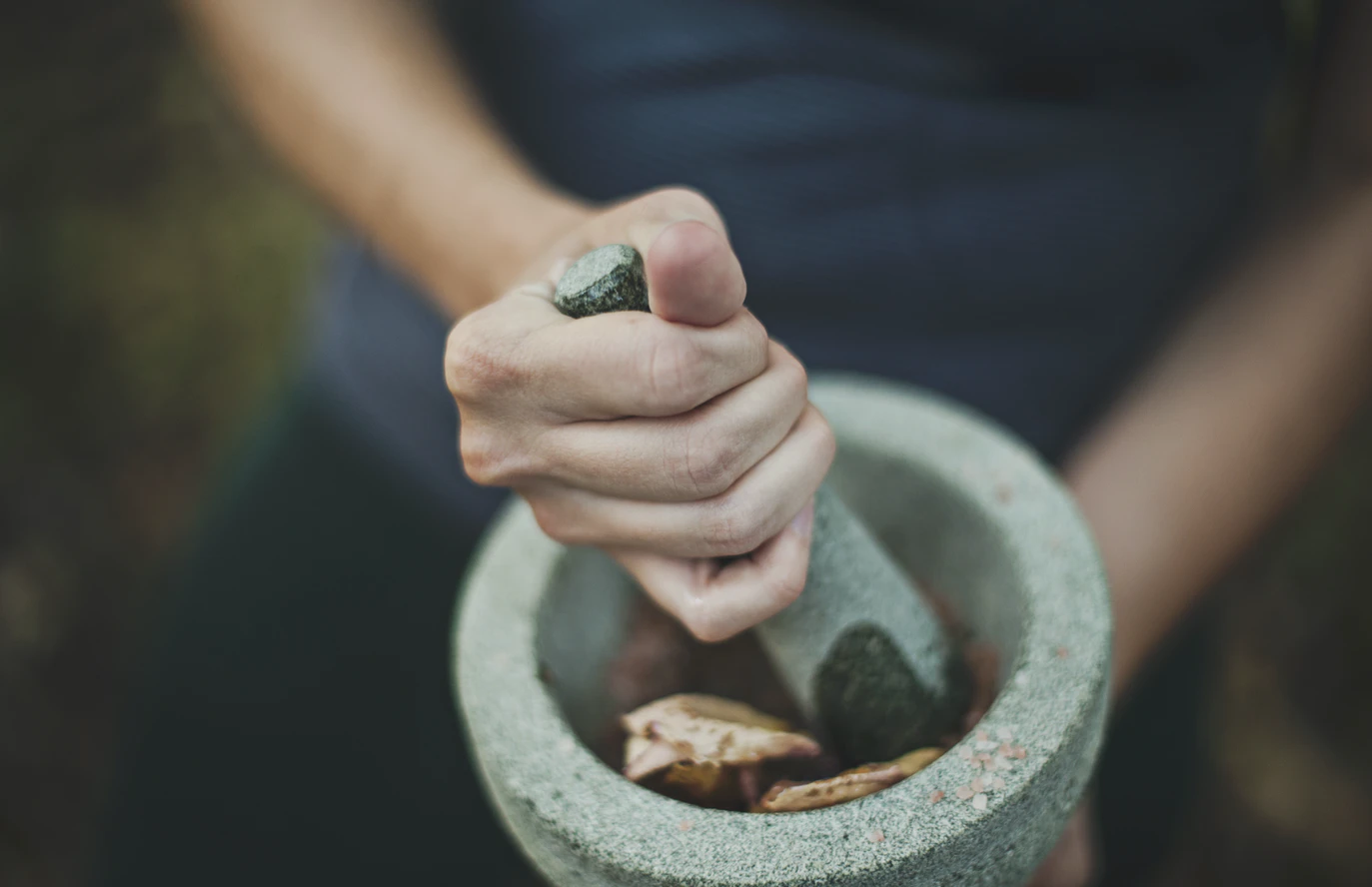 We've already looked at the composition operator briefly in the previous post. Let's do a little refresher. The . (dot) or the compose operator can be used to glue functions together.

Prima facie, this looks like something we can do with traditional imperative programs. It is a little different though. Imperative programs are greedy, when g is applied to the input. It has to finish processing the input completely before it can hand over the execution to the function f. This leads to the below

On the other hand, with functional programs, we have can use lazy evaluation to avoid bottlenecks and let the data flow through, as it is being processed. 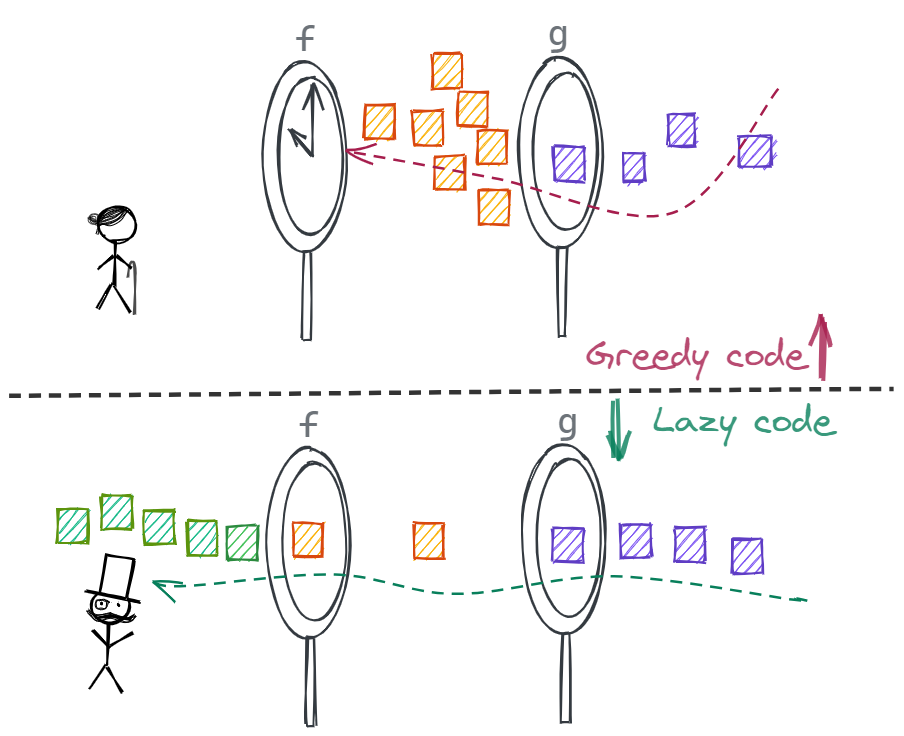 It sounds counter-intuitive, doesn't it? Let's have a look to understand how this works.

Functional languages provide a solution to this problem by being lazy and running the program together in strict synchronization.

In the expression f . g, the execution of g and f are interdependent 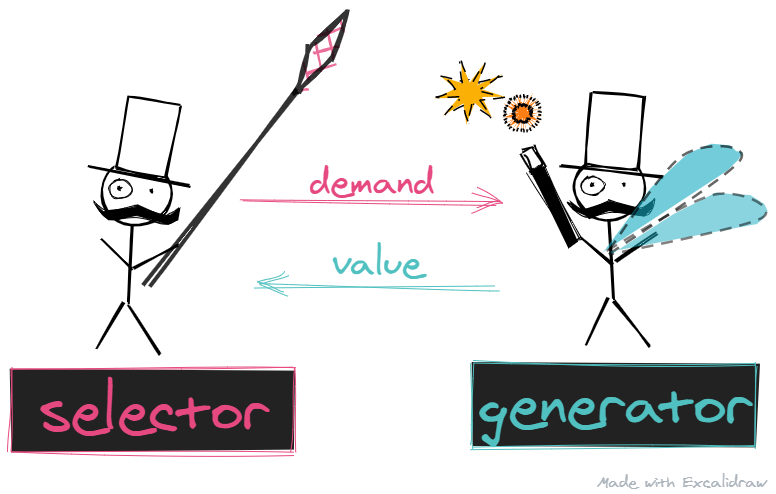 This allows for programs to be modularized differently. Loops can be thought of as made up of two parts - Selectors and Generators

This ends up being very powerful, as we will see in a bit. 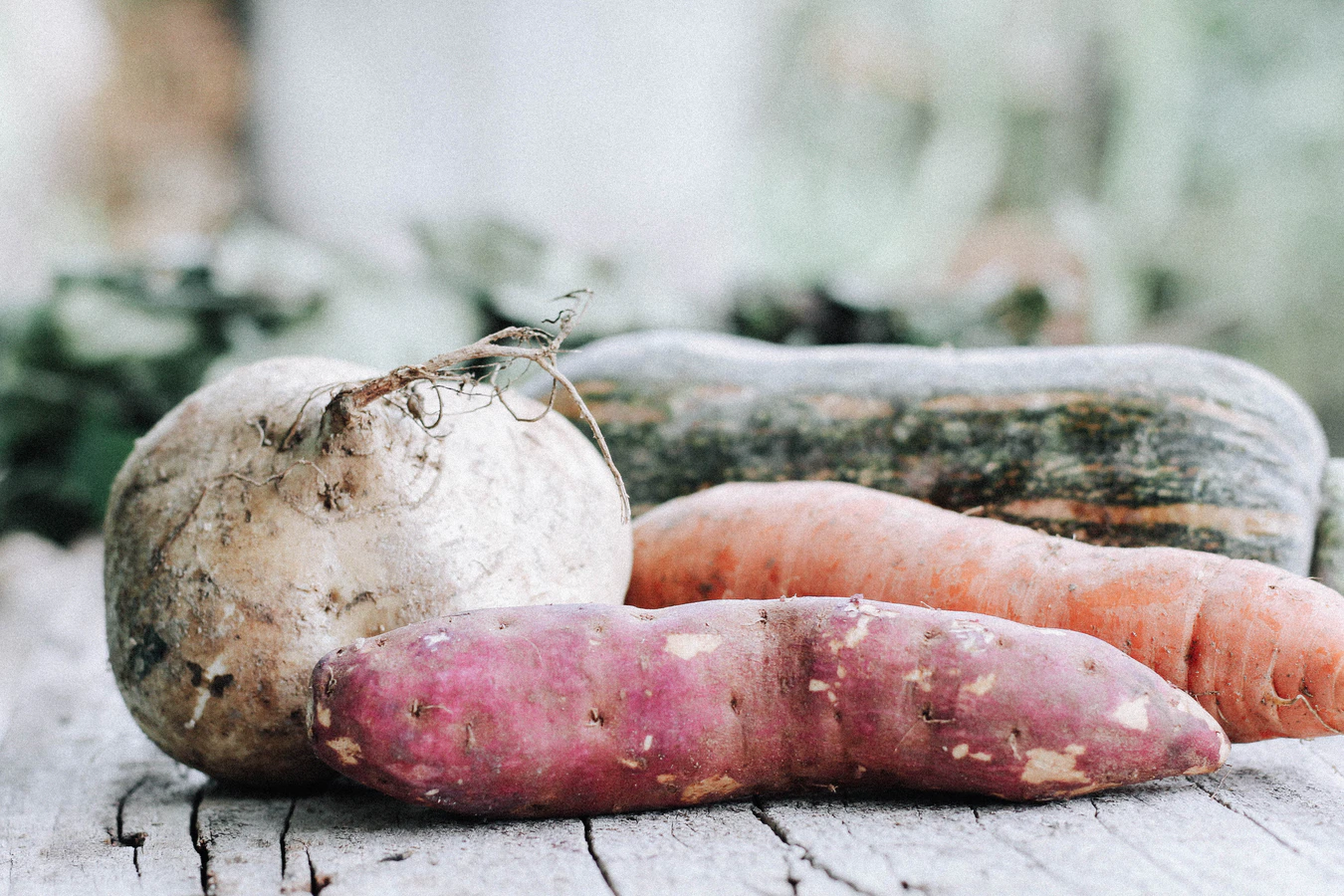 One such method is the Newton-Raphson Method.

That checks out! Now let's look at some code that is written imperatively to use the above algorithm.

If any of the above changes, our function will change. The function is also not extensible.

NOTE: I am using JavaScript, but this could be any other language. I chose JavaScript because it is less noisy and should be easier to read for most folks. Also, please note that JavaScript doesn't make it compulsory to write code this way.

Let's get back to Haskell and try a more decoupled and more modular approach. We will define three separate methods

next' - A simple function that has one responsibility. Take in the number whose square root we want to find along with an approximation of the square root value and simply return the next approximation using the Newton-Raphson method.

repeat' - It takes in a function f along with a value a, and it simply returns a prepended to the result obtained by calling itself again with the same function f. Only this time, we pass in f a. i.e. a transformed value of a. It is a recursive definition.

Note: In the above definition, each time repeat is called

Yes, it will crash your program, and yes, it looks dangerous. But we won't let it run on like that. And by the way, if you hadn't noticed. This is our Generator.

within' - This function, takes in an acceptable error margin eps and a list of values. Then it simply,

Note: within' uses a Haskell feature called guards, it is just a cleaner, and more math-like way to write conditional logic.

When we compose repeat' with within',

within' acts as our Selector.

So when our program begins, we don't have any values present. 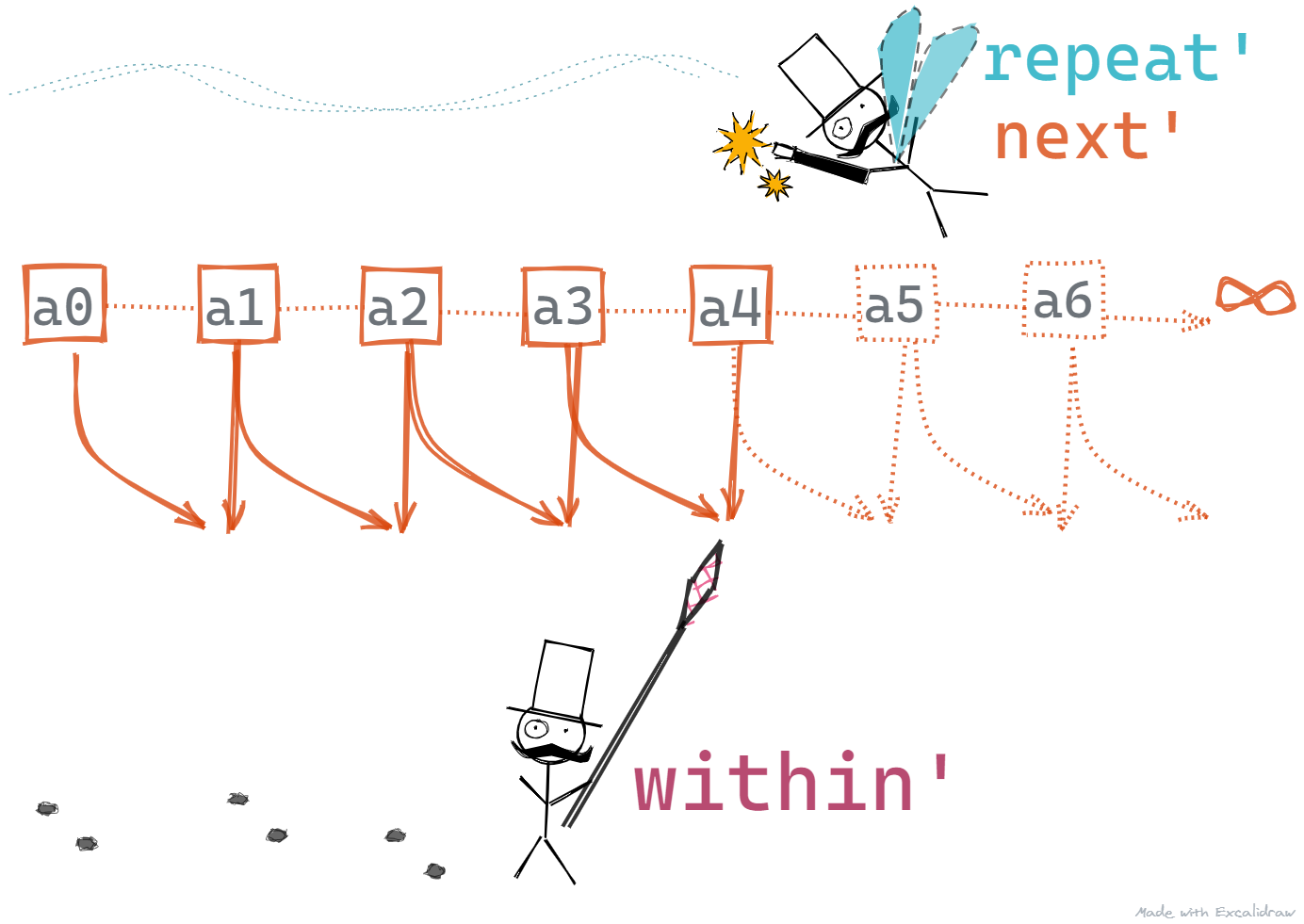 Below are all the pieces of this puzzle put together for easy viewing.

Twist in the tale

Our code works and it provides accurate results, mostly. We see a problem. When we are close enough to our result, the acceptable error margin i.e. the difference between two subsequent approximations is 10e-7. What if our number itself is smaller than that? We may get results that may be relatively further away than we need.

What do we do? Simple. We write a different selector.

relative' - this function, takes in an acceptable error margin eps and a list of values and is similar to within', except for the fact that it checks for relative difference and not just the difference in values. 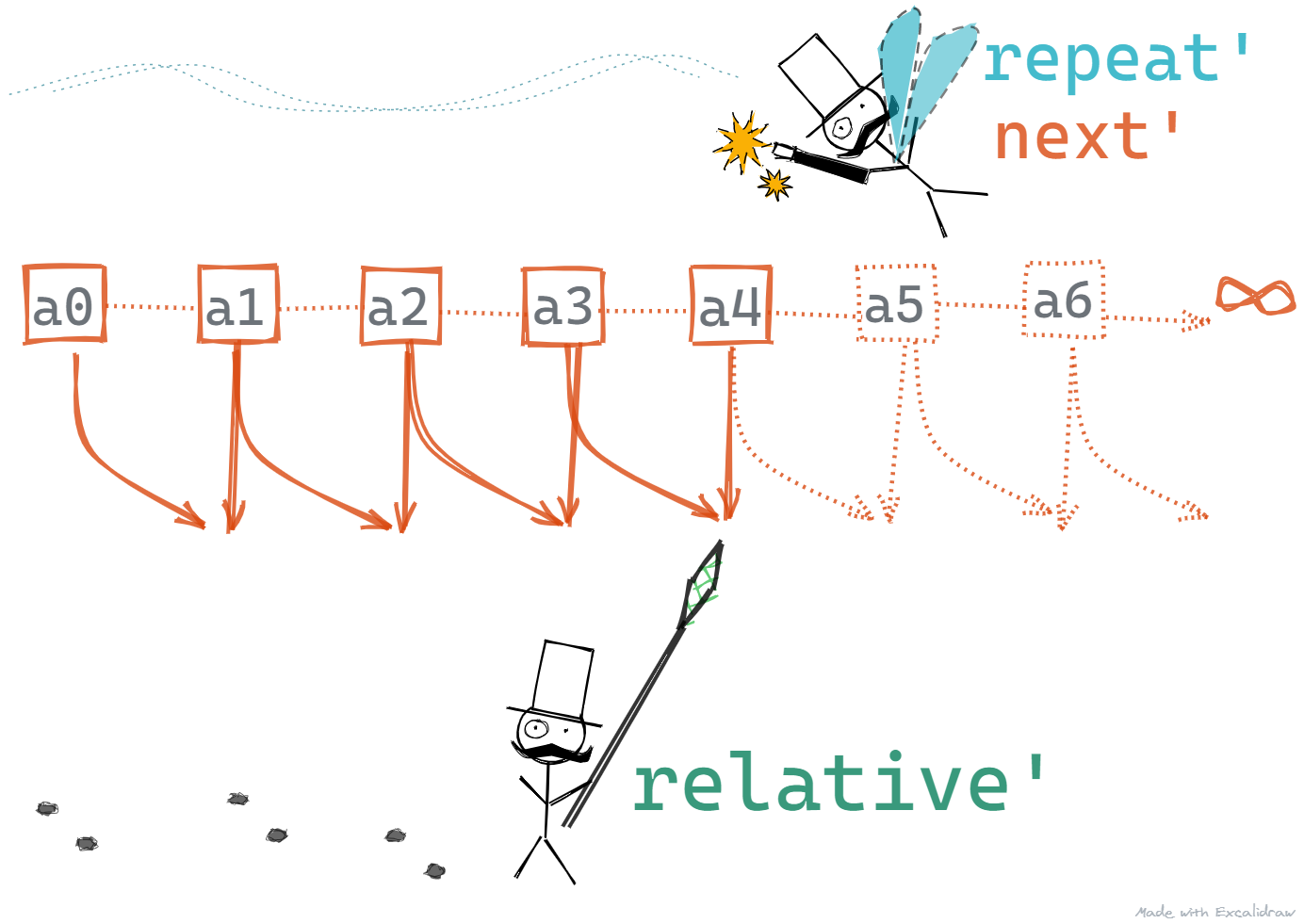 "While some other systems allow programs to be run together in this manner, only functional languages (and not even all of them) use lazy evaluation uniformly for every function call"

This is true and it limits what you can do with lazy evaluation in the languages that don't full support lazy. Haskell is fully lazy but we can implement lazy behavior in JavaScript and other languages by relying on higher-order functions and closures. Under the hood, it is all functions.

"... lazy evaluation’s power depends on the programmer giving up any direct control over the order in which the parts of a program are executed, it would make programming with side effects rather difficult, because predicting in what order —or even whether— they might take place would require knowing a lot about the context in which they are embedded."

If you look back at our imperative example, it changed the values of variables. Other imperative programs may end up depending on the global state, this makes composing programs difficult and more difficult since functions will get coupled due to their dependency or impact on the environment outside their scope.

Yet again, we saw how using functional programming helps us write re-usable components and how we can do a lot more with a lot less code. Next week we will see more power as we tame intertwined infinite sequences!

If you are interested in dabbling around with Haskell, you have the below options.

Why FP Matters - Part 3½ 🧶: Weaving infinities We will see how lazy evaluation helps us to handle code with yet more increasing complexity.

Until then, have a happy new year, and see you on the other side! ⭐🌟✨ 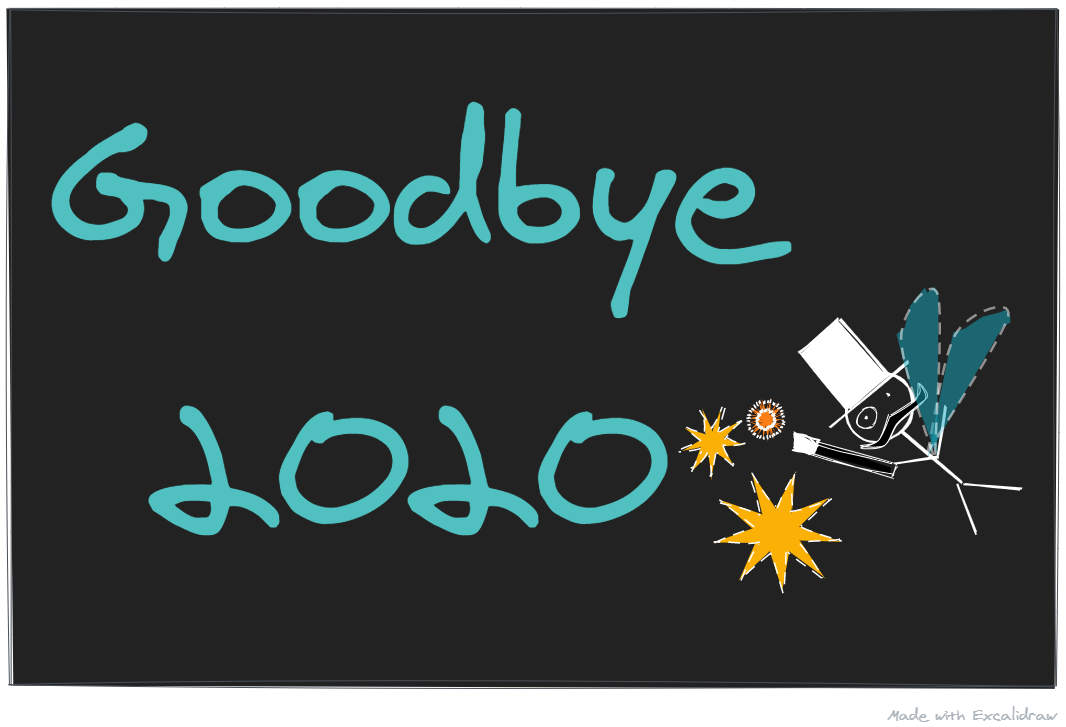