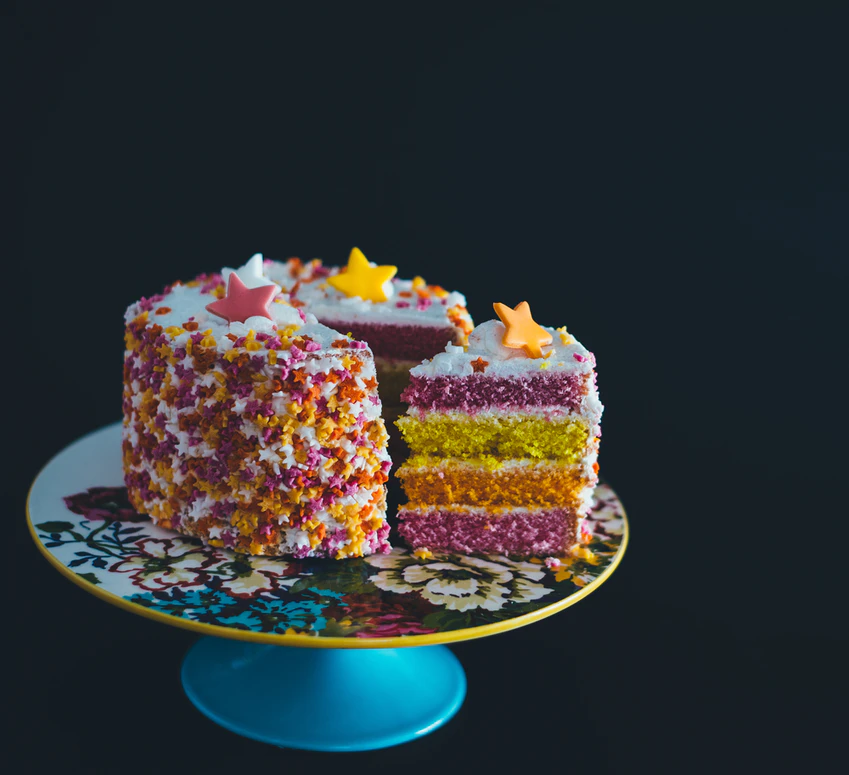 Well, now it is time for something sweet! 😋

If you don't know what I am talking about, this is a series of articles. To have better context, you might want start here - Why FP Matters - Part 1 🐘 : A brief introduction

As I promised, there will be more code. There will be around 48 lines of it. Yes, 48 lines with white space and execution samples included 🙂. We will write code to perform the below

We will achieve all of this with the help of small yet powerful reusable functions. This should help us realize the power of higher-order functions. I also promise you a BONUS 🎁 at the end of the blog, for all you folks who are bored of looking at all the Haskell code.

If you are curious, below is a teaser of what the code will look like in the end. Let's get started! 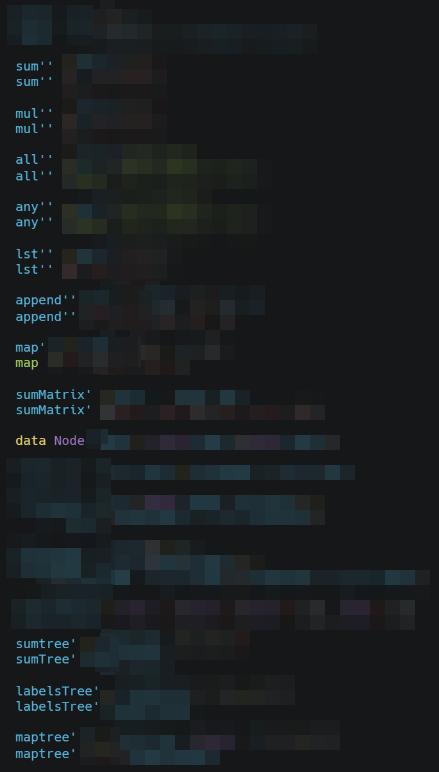 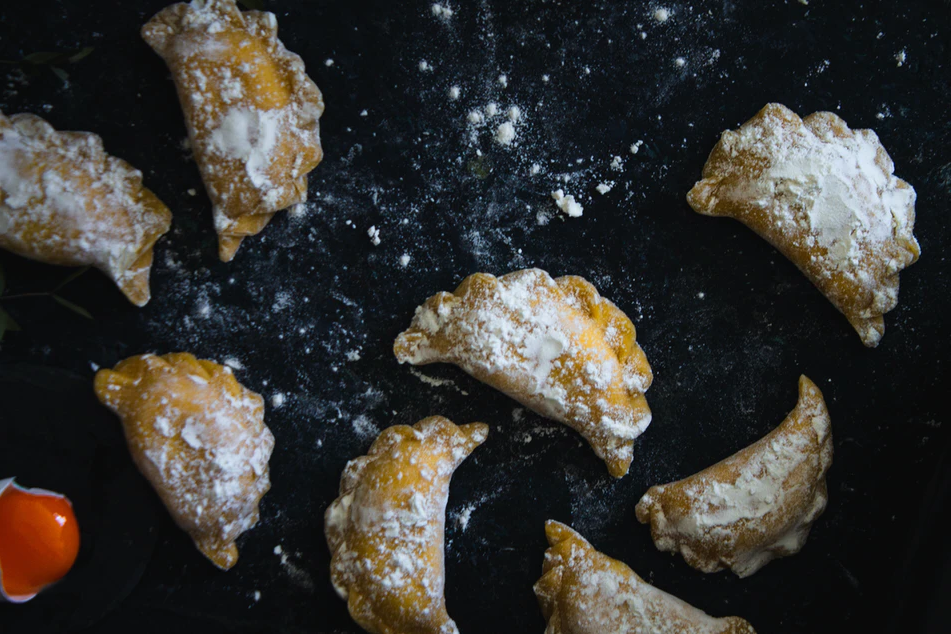 Let's say that you serve someone some morsels of food on a plate. Do you instruct them about how to pick each morsel and eat it? No, you just tell them to enjoy their food. This works for most adults. Wouldn't it be nice if we could do the same with our programs? We could partly, but computers take things too literally. We need to tell them when to stop.

For example, below is a function that receives a list of numbers as input, and we want to return the sum of all the numbers in the list. One version of the function would look like the below.

Since we are not relying on global state or modifying it, and we are dependent only on the input to the function, our programs have referential transparency. We can use the substitution method to prove that our program works. We simply replace the definition of the function as applicable at each step.

Note: sum' returns a 0 (zero) for an empty list

All this would have been good for us a few weeks back. But we've learned some Haskell along the way. We know that it has some sweet sugary magic.

So, by applying pattern matching we can get rid of the if-then-else and the below

can be re-written as

Clean! Oh, you don't agree. Let's put a potion of the destructuring in there too. This will get rid of the need to use head and tail. We will be self reliant.

This version works exactly the same way as we worked out above. How do we read this? Simple

Well, I hope you are happier now. We dropped a lot of characters with that one. We could follow this pattern and write more useful functions.

No? You are not happy? Well alright then. I think there is no pleasing you today. Let's try refactor. Let's try to fold ... 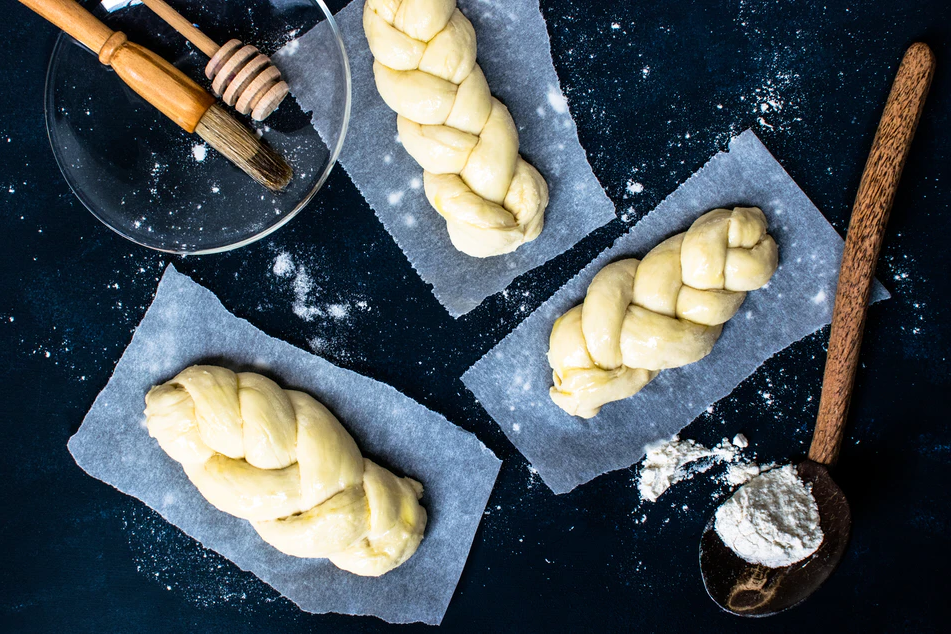 We will attempt to refactor the functions and see if there are any reusable parts. But first, let's make use of the charming operators as function trick. So, the below

How did that help? If you look closely, the shape of the functions is similar.

Wouldn't it be nice, if we could pass in just the differences to special function and get the required behavior for each of our above functions? Let's define that as a higher-order function and call it fold'.

Now let's call fold' with f as (+), a as 0 (zero) and a list of numbers. Now applying the substitution method.

We can define sum' in terms of fold' as below

I know, I know. You remember that we can do partial application and make this shorter. There you go.

We can define our other methods using fold' too.

Phew, that was a lot of code. I'm kidding of course. By the way, we are done with 14 lines of code and we have covered 4 out of 10 items that we listed as our targets above.

But is that the point of this all? To write less code? Well yes, and other things. What we have done here is

Below is a simple visualization, to help you see how we extracted the differences.

Let's define one more function using fold' before we move on.

Let's expand the below 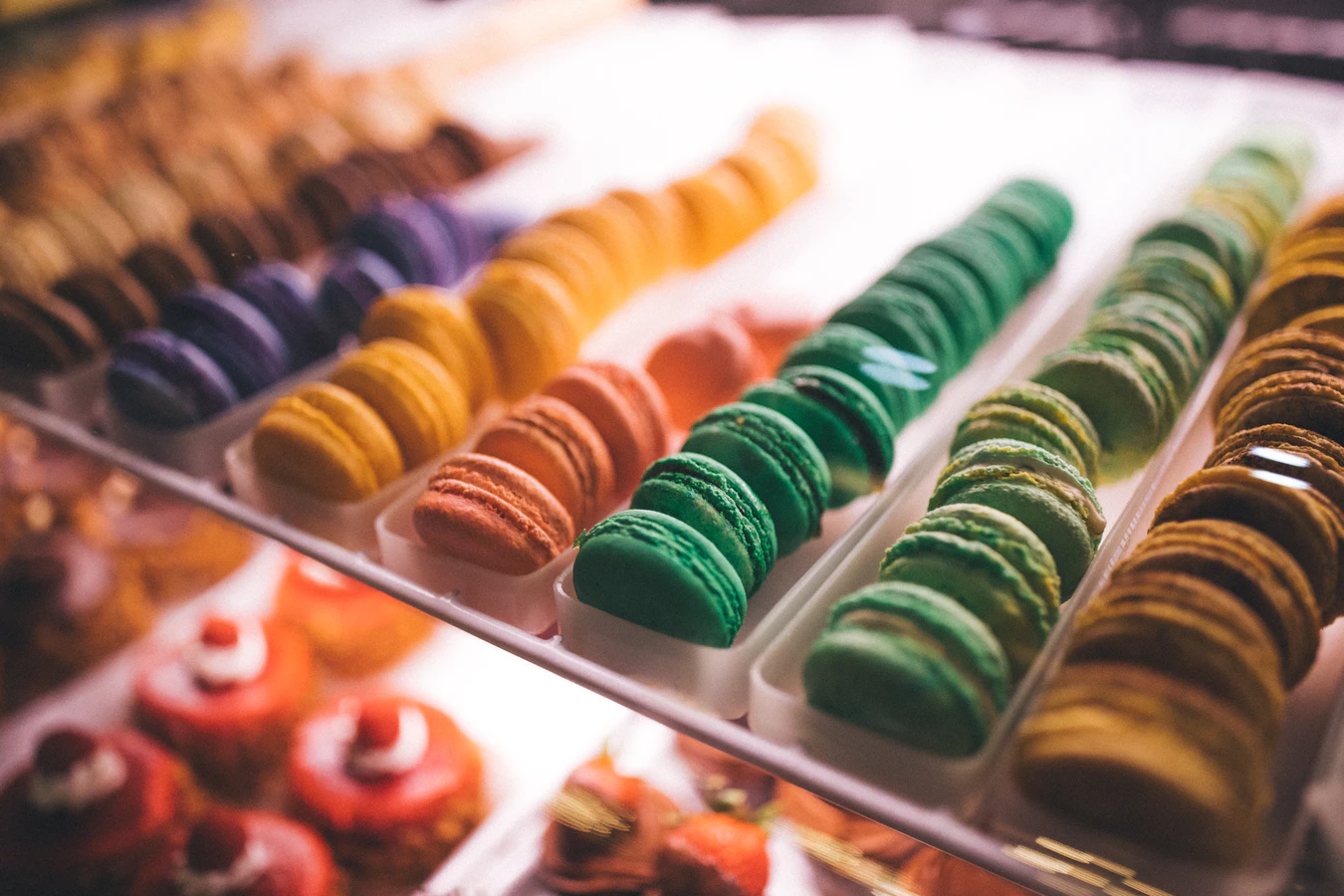 Wouldn't it be nice to have a function that transforms all the elements of a list. Perhaps we could use it to increment all the numbers in the list by 1.

If we would have a function called inc

If we were to implement this method map' from scratch, it would look like the below.

On comparison with the earlier definitions of sum', mul' and lst' above. It has a similar shape with just a couple of differences. In fact, if you compare it with lst, it is very similar in nature except for the below

There seems to be a possibility for using fold' here, but first we must refactor it a little.

First, let's look at the below function that

using the above, we can change

If you look closely, it is a pattern that can be replaced by fold'. Comparing it with lst', it is clear here that every element x will first be transformed by f then prepended to the list.

using this, we can write map' in terms of fold'

So, we have developed map, which is another generally useful function — applies any function f to all the elements of a list. And we did this using fold'. If you try to describe it in english, it says the we need to fold' or combine the elements in the list using ((:) . f ) i.e. transform then prepend to a list, and we start with an empty list `[].

Below is how we can use map' and use modularized transformations that live within separate functions.

Using what we have learned so far, the code to sum all the numbers in a matrix can be written as below. Note that we have chosen to represent the matrix as a list of lists.

Alright, we've come a long way and we have reaped the benefits of using higher-order functions to write short succint code to process lists. And we did all this from scratch using just functions and a little bit of syntactic sugar.

This all works well for lists, but what about other data structures? Can we write re-usable modules for them as well? 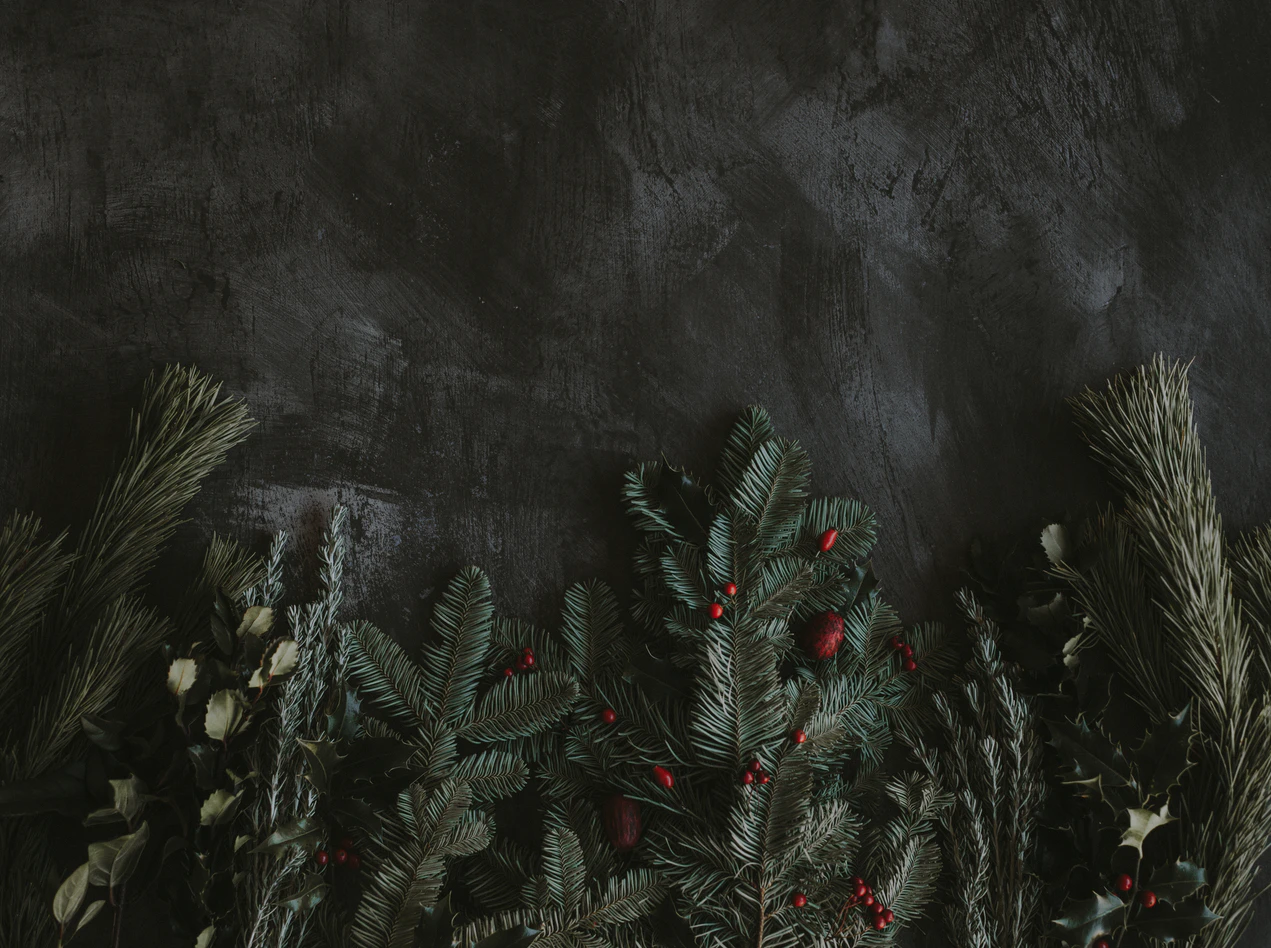 Below is how you can define a data type for a tree in Haskell - Node. It takes in a value as the node label and it takes in a list of children. Each of the children are of type Node. It is a recursive definition.

Using the above, we can instantiate a tree as below.

We can now define a function foldtree' function for our tree. This will be analogous to the fold' function that we defined for lists.

Let's use foldtree' to define sumtree' a function that takes in a tree and returns a sum of all the label values.

If we use substitution to evaluate this we will end up with the below, then evaluate to 12. If you are interested, the complete steps can be found here.

Similarly, we can define labelsTree' to collect all the labels as below.

labelsTree numberNodes will reduce to the below, and then evaluate to [1, 2, 4, 5]. Complete steps here.

We could replace them in the above expression and get

If you remember my tip earlier, 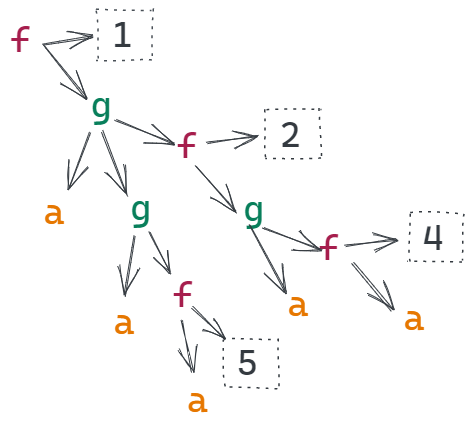 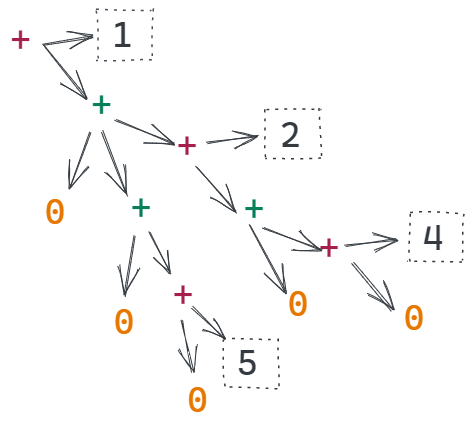 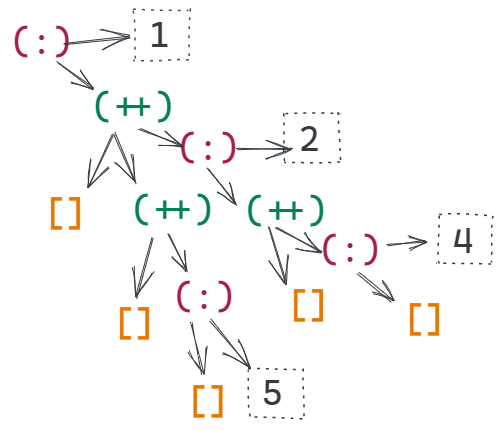 And, finally we can use foldtree' to define maptree', a function analogous to map'. Only, this one works on trees.

Final version of all the code that we saw in this post is as below. *raises curtain*

All this can be achieved because functional languages allow functions that are indivisible in conventional programming languages to be expressed as a combinations of parts — a general higher-order function and some particular specializing functions.

Once defined, such higher-order functions allow many operations to be programmed very easily.

We saw how defining, fold' and foldtree' could help us implement several aggregating (sum', sumtree', sumMatrix', etc. ) and transforming function (map', maptree', etc) with ease and just a few characters.

Whenever a new datatype is defined, higher-order functions should be written for processing it. This makes manipulating the datatype easy, and it also localizes knowledge about the details of its representation.

The best analogy with conventional programming is with extensible languages — in effect, the programming language can be extended with new control structures whenever desired. 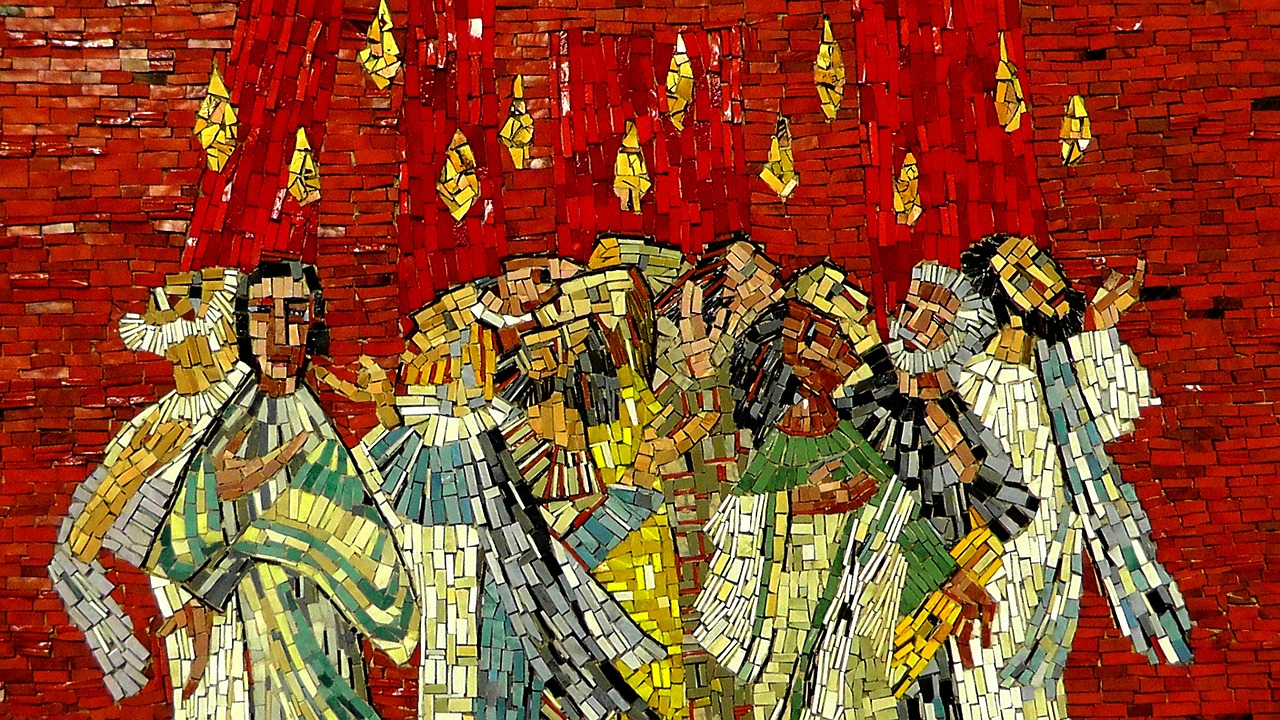 And now for the BONUS! You have been patient, I think you deserve more code, in the language that you understand. I have put together full working samples in 8 popular programming languages below for you to enjoy. Feel free to review!

If you think I can help you, of you think something is off, I am open to take requests and reviews 🙂. You can hit me up @ryanivandsouza or just comment on the GitHub gist page with the code samples.

We saw how using functional programming helps is write re-usable components and how we can do a lot more with a lot less code.

If you are interested in dabbling around with Haskell, you have the below options.

Why FP Matters - Part 3 🎩 - Lazy evaluation - Conjuring infinities: Things will get really lazy. There will be math, infinite lists, and a whole another level fun! We've just completed 8 out of 23 pages of the original content from the white paper by John Hughes1. We still have a lot to cover. See you next week. 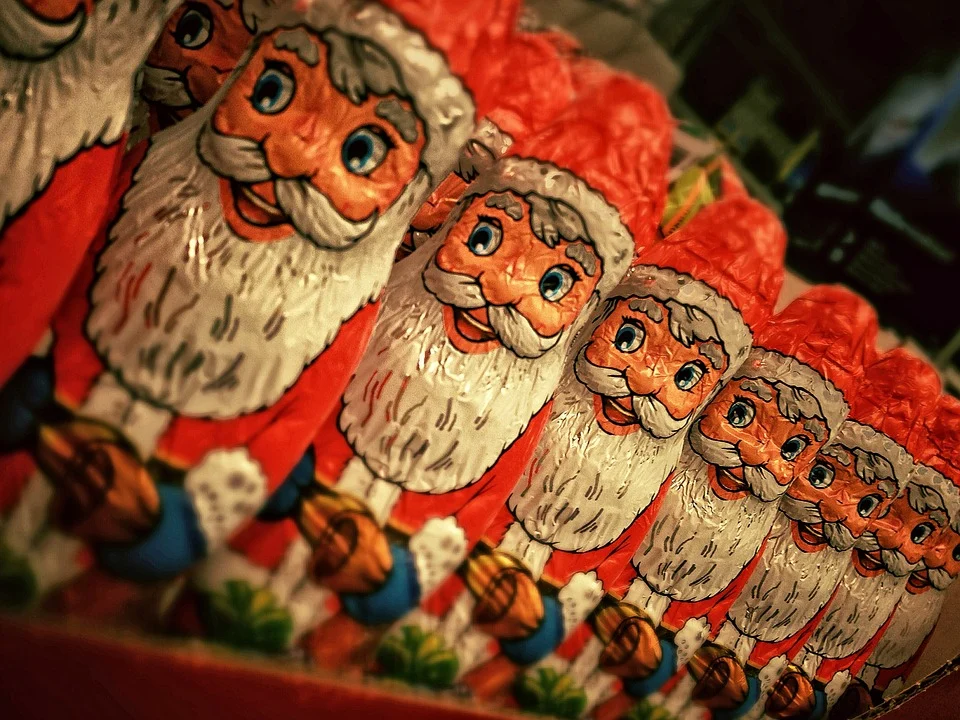